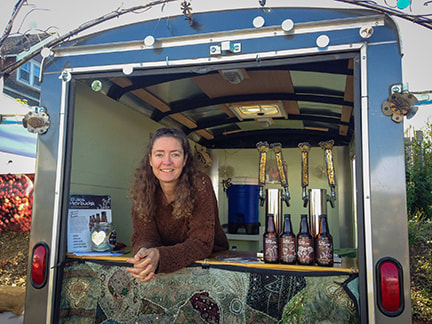 Eva Sippl is a licensed natural health practitioner (“Heilpraktiker”, licensed in Germany), a polarity therapist, and reiki master. Eva made kombucha for years at home for her own enjoyment. She discovered on a visit to her home country in 2007 that kombuchas made in Germany are also brewed with herbal teas. This inspired Eva to combine her passion for kombucha with her knowledge of herbal healing properties.

After conducting extensive research on the herbal approach to kombucha brewing, Eva then decided to add some green tea to the herbal brew to ensure the culture’s health. She started to create different recipes in her kitchen and gave them to her friends to try. People loved them and were so excited about the idea of integrating herbal teas into the kombucha brew that Eva decided to rent a brewing facility in Portland, Oregon and bring them into stores to sell.

Eva shows her commitment to support the health of the planet and the people populating it by using only the finest organic and wild harvested ingredients. Pacific Botanicals, and Frontier Coop, the suppliers for all the herbs and teas used in her products, have been a long-time leader in sustainable and responsible sourcing. The sugar used in the brewing process is 100% certified organic and fair trade.
​
Eva’s Herbucha has been growing steadily and more and more stores are stocking their shelves with her 6 amazing flavors.

​Kombucha is a fermented tea dating back several thousand years in Asia. The tea fungus originated in China in 220 BCE during the Tsin Dynasty and was referred to as as the ‘Divine Che’ (or the Remedy of Immortality). From there it traveled to Russia and Japan and made its way to Europe around the turn of the century. It became quite popular across Europe until World War II with the shortage of tea and sugar it disappeared, but has since made a comeback and has recently become quite popular in the western world.

The name is said to originate from Doctor Kombu, who brought the tea fungus to Japan from Korea to cure the digestive troubles of the Emperor in the year 414.

Kombucha is rich in antioxidants, probiotics, and detoxifying acids, offering a powerful energy boost. It is said to  cleanse the blood of disease causing toxins. This may alleviate or even heal disorders such as intestinal problems, digestive disorders, arthritis pains and kidney stones.

We create products that benefit people while supporting our planet through carefully selected local and global business practices and partnerships.

Our company’s philosophy is to treat Mother Earth gently and with respect. For example, we use only recycled paper for our office and advertising materials, 98% of our packaging materials are produced in Portland, OR and our bottles are made of recycled glass.